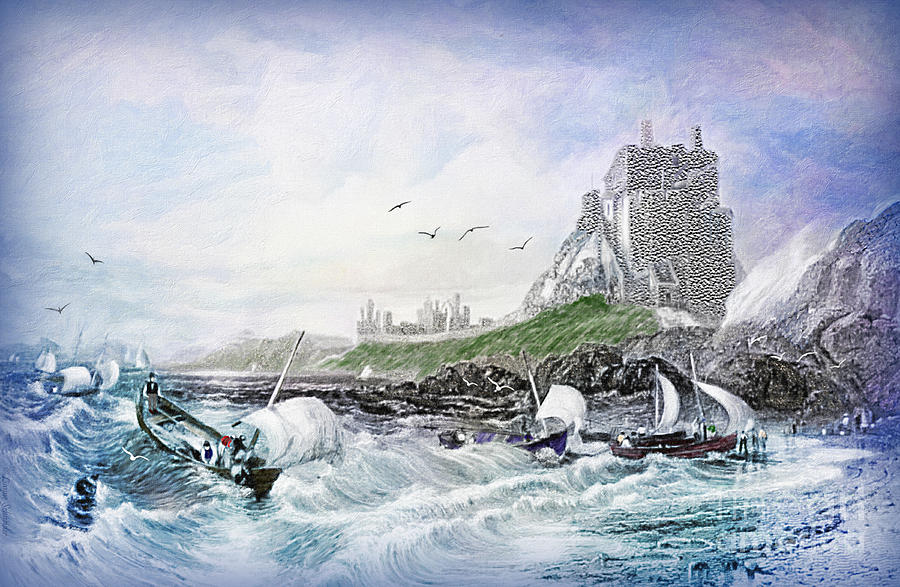 The newest addition to my Sea Stories series of digital paintings.

HOLY ISLAND
Lindisfarne was the name given to the Island by the first Anglo-Saxons to live here and we do not know the meaning of the word. But the monks of Durham, after the Norman conquest, added the words Holy Island when they looked back over the story which began with the coming of Saint Aidan and the building of the first monastery in 635AD, continued with the ministry of the "very popular" Saint Cuthbert and then received a staggering blow from the Viking attack in 793. For the Durham monks who died as Christian marytrs in this pagan attack and our earlier saints, the Island was deservedly named "Holy".

The Golden Age of Lindisfarne: The period of the first monastery is referred to as the "Golden Age" of Lindisfarne. Aidan and his monks came from the Irish monastery of Iona and with the support of King Oswald (based at nearby Bamburgh) worked as missionaries among the pagan English of Northumbria. In their monastery they set up the first known school in this area and introduced the arts of reading and writing, the Latin language and the Bible and other Christian books (all in Latin). They trained boys as practical missionaries who later went out over much of England to spread the Gospel. Aidan also encouraged women to become nuns and girls to receive education but not in this monastery. In time Lindisfarne became known for its skill in Christian art of which the Lindisfarne Gospels are the most beautiful surviving example.

The Benedictine Period: After the Norman Conquest (1066) the Bendictine monks of Durham possessed the undecayed body of St.Cuthbert and saw themselves as the inheritors of the Lindisfarne tradition. Here on the Island they built the second monastery, a small Benedictine house staffed by Durham monks. This monastery was beset by a number of troubles, especially during the border wars between England and Scotland. It was finally dissolved by HenryVIII in 1536.

The ruins of the second monastery can be seen on the Island today. The first monastery, originally built entirely in wood, has disappeared. But there is evidence that the present parish church of St.Mary the Virgin stands on the site of Aidan's original monastery.

A hand-painted digital interpretation of a small black and white sketch in an 1840s book in the public domain. I purchased the rights to use the collection of illustrations, though they are also public domain. As with others in this Sea Stories series, I copied the small original image onto 1/8 inch graph paper and then painstakingly enlarged the lines from each tiny square to a 1/2 inch grid paper - a technique that works wonderfully for me because my free-hand drawing skills leave quite a bit to be desired! And because in this case there were a million details I'd have missed if I'd not gone patiently square by square. The enlargement was then hand-painted digitally with texture added.

Please contact the artist directly if you purchase this image as a giclee print on canvas, framed or unframed. A signed and numbered Certificate of Authenticity is available for each canvas indicating title of the work, artist’s name, date of creation, a thumbnail of the painting, the origin of original work if the painting is a derivative, the number of your print in the limited printing and a guarantee that the work will no longer be available to the public in a canvas format once 25 canvas prints are sold.

Copyright Lianne Schneider 2014
This is a rights managed image available for licensing at http://licensing.pixels.com/profiles/lianne-schneider.html

All images and my personal poetry/prose are protected by copyright and may not be reproduced, downloaded, distributed, transmitted, copied, reproduced in derivative works, displayed, published or broadcast by any means or in any form without prior written consent from the artist. My copyright does not imply rights to an underlying public domain image and I make no such claim. Copyright on works derived from or based on images in the public domain applies only to the subsequent manipulation or the digital painting resulting from my own style and interpretation. The original image remains in the public domain and such images are used in accordance with international law.

Beautiful tones and work on this wonderful series! Gorgeous l/f

Love the intensity and movement in this beautiful digital painting, Lianne! L/F

Delightful choice of colors and perfect framing Lianne. Love it!

Quite a unique work of art, Lianne. This is filled with energy, so much to see and of course beautiful. Lf

Lianne, this is a lovely image of this wonderful little island with its reminders of early Christian pilgrims and settlers. Now travelers, like me, count it a privilege to have visited... and come away renewed. f/l

Wow Lianne, this is beautiful! L Your discription had me enthralled, very well done!

Amazing work and wonderful story behind it! v,f,t,g+,p

I love your work on water Lianne. L/F

Oh my! This painting totally pulled me into the feeling of what it is like! Having had the experience of being in waves like this makes it all the more real! Wonderfully done! Sharing on FB. L/F/FB