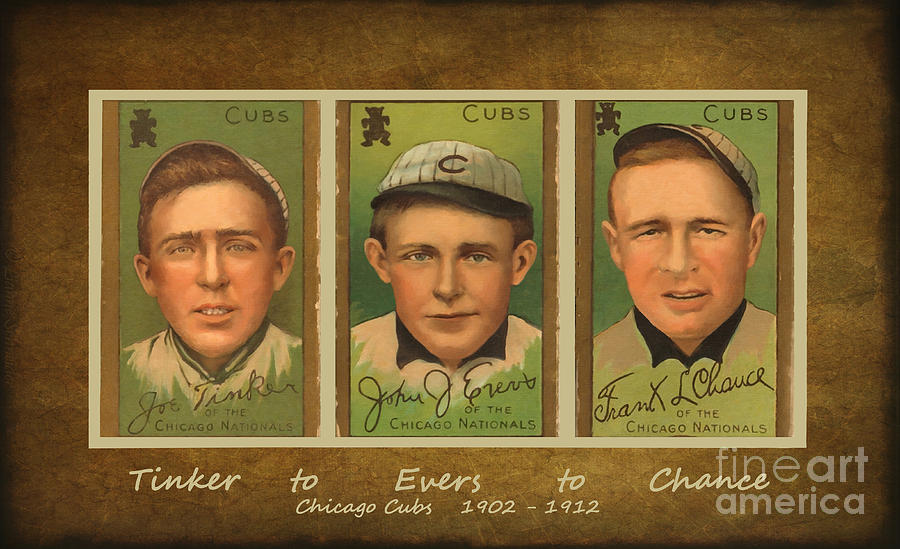 Tinker to Evers to Chance

Tinker to Evers to Chance

Baseball history - the Chicago Cubs of 1907, perhaps "the best team ever" included this dynamic double-play trio of Tinker to Evers to Chance.

A complete departure for me in terms of subject matter - but the history buff in me couldn't resist the challenge. The images in this triptych were painted using baseball card pictures taken by photographer Paul Thompson who owned the copyright only for the gold borders that surrounded the original cards. An article in the Smithsonian described the significant departure of Thompson's portraits from those on other baseball cards - distributed by the American Tobacco Company among other tobacco companies. Thompson's were chromolithographs which could be printed in color while earlier cards had been black and white.

The poem, "Baseball's Sad Lexicon", also known as "Tinker to Evers to Chance" after its refrain, is a 1910 baseball poem by Franklin Pierce Adams. The poem is presented as a single, rueful stanza from the point of view of a New York Giants fan watching the Chicago Cubs infield complete a double play.

Chicago Cubs infielders Joe Tinker, Johnny Evers, and Frank Chance began playing together with the Cubs in 1902, and formed a double play combination that lasted through April 1912. Their consistently solid fielding and hitting led the Cubs to four National League pennants (1906-8, 1910) and two World Series wins (1907-8). In 1910, New York newspaper columnist Franklin Pierce Adams immortalized the three ballplayers in a short verse. The Cubs won the National League pennant four times between 1906 and 1910, often defeating the Giants en route to the World Series. In fact, the 1907 Chicago Cubs are often referred to as "the best team ever" and there is a book by that name that celebrates this talented team in its entirety.

Adams' poem was first published in the New York Evening Mail on July 12, 1910. Popular among sportswriters, numerous additional verses were written. The poem gave Tinker, Evers, and Chance increased popularity. It has been credited with their elections to the National Baseball Hall of Fame in 1946.

Off the field, two of the three never spoke to one another - Joe Tinker and John Evers disliked each other immensely and no sign of rapprochement appeared until both were asked to visit Chance as he lay dying.

* The term "gonfalon" refers to a flag or pennant, and Adams uses the phrase "pricking our gonfalon bubble" to describe the repeated success of the Chicago Cubs and their celebrated infield against their National League rivals, his beloved New York Giants.

This is a derivative work based on images now in the public domain, originating from photographs by Paul Thompson in the early 1900s.

Congratulations on your sale of this wonderful artwork! F/L

Well done on the sale!

Congratulation on the sale!!

As a Cubs fan, I find this terrific and as a person who appreciates art and history I find it splendid!

Congrats on your sale...very neat!

Sorry - I neglected to thank Jim and ShitlaPrasad for also featuring this in COMFORTABLE ART AND 1-2-3-4-5. I'm very honored by both those features.

Thank you so much Michael for featuring this painting in NEW ART WORKS 2 - I'm tickled pink!

Such an unusual subject from you, yet so well executed Lianne. This is absolutely stunning!

Fantastic work! I love the way you put this together and the colors are great! Wonderful vintage look and feel! f/love!!

A belated but no less heartfelt thank you to Jouko and Jeremiah and to Sandra as well for featuring this image in their wonderful groups: ART FROM THE PAST, AMERICAN BASEBALL and MEMORIES AND NOSTALGIA. I'm incredibly honored - this was a project I very much enjoyed creating so it means a lot to me. To all who have come by to leave a note of encouragement - thank you from my heart. I hope you've found me visiting your work in recent days to thank you in person but if not, I'll get there soon!!

Wonderful work Lianne, complete with a great history of the image. L/F

These men were before my time, but I love how you did this and unified it! I was a big baseball fan as a child and loved to play it more than watch it. So much fun! v/