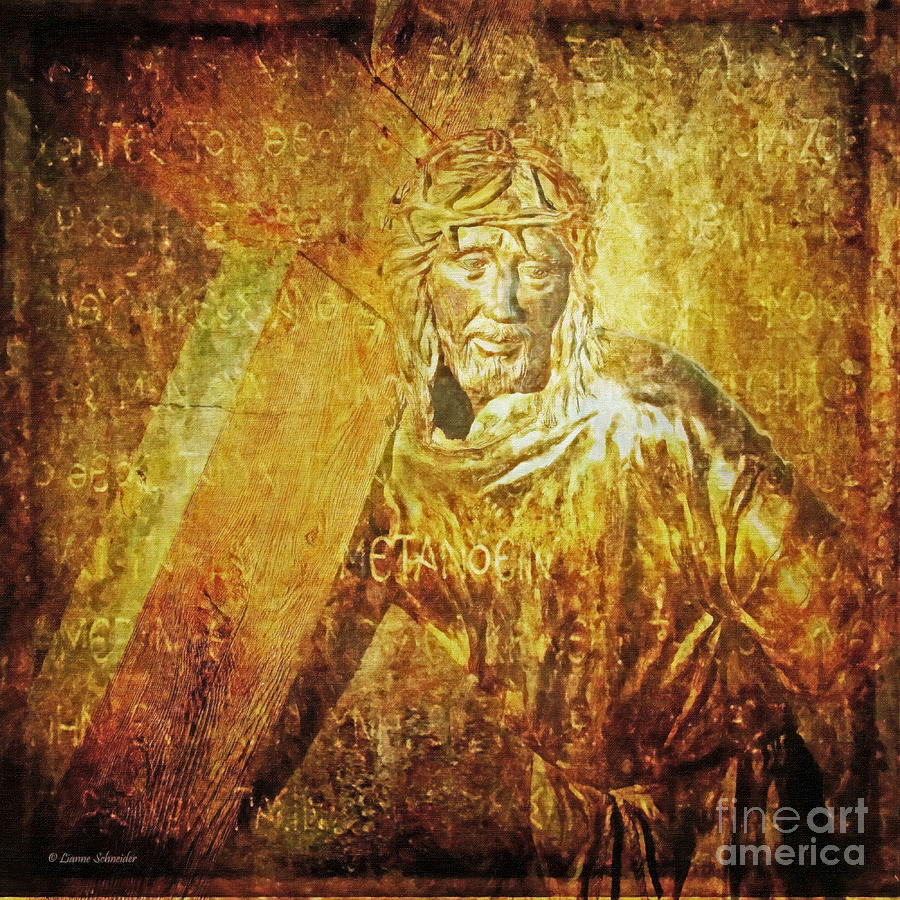 Takes up the Cross Via Dolorosa 2

Takes up the Cross Via Dolorosa 2

The second in a series of 14 images.

These images - 14 in all - are in fulfillment of a commission of 40x40 prints for a Catholic Church in Louisiana of the series that represent the 14 Stations of the Cross or Via Dolorosa (Way of Sorrows) which are vignettes of Jesus Christ's walk to Cavalry and his Crucifixion. Similar images in plaster, bronze, pewter, painted on wood panels or sculpted can be found in Christian churches throughout the world and in many communities, people from all denominations participate in "Living Stations" or "Passion plays" based on these same moments.

For many hundreds of years, from the early Middle Ages until more than a century after the Renaissance - Catholic Christian religious art dominated Western/European culture. Except for portraiture, one would have been hard put to find much secular art in Europe until the late 16th and 17th centuries.

All images and my personal poetry/prose are protected by copyright and may not be reproduced, downloaded, distributed, transmitted, copied, reproduced in derivative works, displayed, published or broadcast by any means or in any form without prior written consent from the artist. Copyright on works derived from or based on images in the public domain applies only to the subsequent manipulation or painting resulting from my changes. The original image remains in the public domain and such images are used with in accordance with international copyright laws

Congratulations on beautiful art piece, and on the sale!

Hi Lianne taking time out to stop and enjoy some of your greats art work this one really got to me so thank you for your Art of someone very close to my heart .

A huge thank you to John and Kiki Art for featuring this work in IMAGES THAT EXCITE YOU and DIGITAL ART AND FABULOUS FRACTALS. It's a great honor.

Beautiful/ Powerful Image..Blessing to you Lianne

My heartfelt thanks Bob for featuring this in ALL FINE ART AMERICA ARTWORK. I'm so very honored.

My heartfelt thanks Annie for choosing to feature this image in VISUAL VOICE. I am humbled and very honored by this.

Robert I can't thank you enough for featuring this image in FAA FEATURED IMAGES. This is a very special honor for me.

Congrats on your feature in Visual Voice---stunning work and wonderful subject :) V/F

Thank you so very much Barbara for featuring this in MOTIVATION MEDITATION INSPIRATION. That means more to me than I can say.

CONGRATULATIONS! Your work has been chosen to be Featured in MOTIVATION MEDITATION INSPIRATION Group....well done! v/f

Joe, I'm so touched and deeply honored that you chose to feature this work in EXCELLENT SELF-TAUGHT ARTISTS. Thank you so very much.

Rose I'm just so very honored that you have chosen to feature this image in CATHOLIC ART. This series means a great deal to me and it is just wonderful to have it affirmed. Thank you so much.

This is a powerful and touching piece of work Lianne... and your ever so talented. :-) fv

Nick I'm so moved by your lovely comment - thank you so very much.

Awesome work my dear Lianne!!! Congrats on your sale !! (f/v)