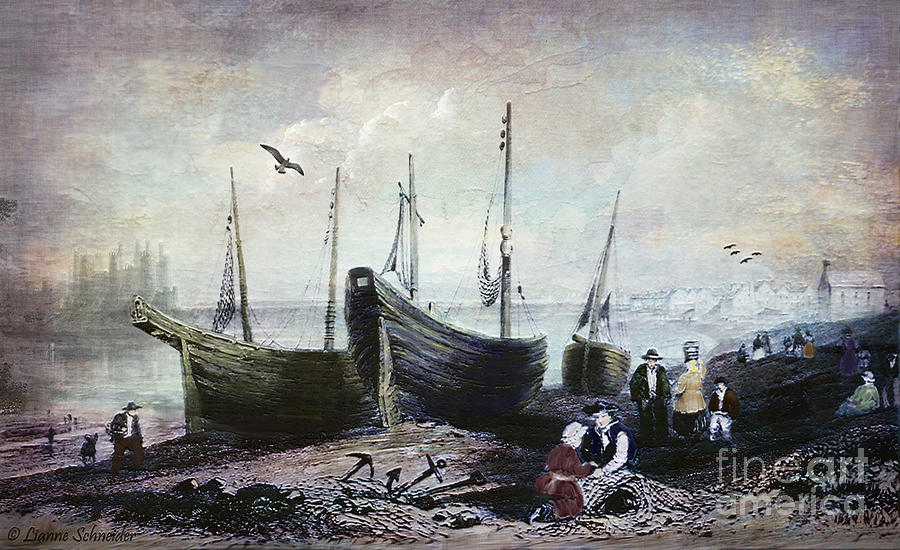 This digital painting is another in my Sea Stories gallery, part of the Down to the Sea in Ships series and is based once again on some small, rather faded black and white sketches in an 1840s book. Both the book and the illustrations are in the public domain. I enlarged the original drawings using an old artists' technique taught to me by my cousin (who is a fine artist). The technique involves transferring lines from small squares drawn on the original image to larger squares or graph paper. In this case, I scanned the original image onto 1/8 inch graph paper and enlarged to 1/2 inch paper - and this technique works wonderfully for me because my free-hand drawing skills leave quite a bit to be desired! The enlargement was then hand-painted digitally with texture added.

From Allonby: Home at http://www.allonbycumbria.co.uk/
ALLONBY
The Romans arrived in Britain around 55 BC and by 122 AD the Emperor Hadrian ordered the construction of a wall between Wallsend on the Tyne (North East England) and Bowness on the Solway coast. This wall was the most heavily fortified border in the Roman Empire. The Cumbrian coast of the Solway was an extension of this Roman defense system against sea attack, the coast being fortified with a series small forts and look-out posts from Bowness to St Bees.

The first settlers in the area, to set up permanent settlements, were probably the Anglo-Saxons arriving some time after the demise of Roman rule in the 5th Century.

During the first Viking raids of Britain from late the 8th Century the Solway coast appears to have been over looked, until the beginning of the 9th Century when the Celtic people of Ireland expelled the Viking settlers from Dublin. Looking for somewhere new to live, the Vikings set sail and headed north. It is said that they landed at Allonby and settled here peacefully.

Salt has been extracted from sea water along the Solway coast for nearly 700 years from around the 12th Century. The saltpans that can still be seen at Crosscanoby date from around 1650.

During the 17th and 18th Centuries, smuggling on the Solway coast was rife and many illicit loads such as spirits, tobacco and textiles from Scotland, Ireland and the Isle of Man, were landed between the Allonby and Skinburness by gangs of smugglers.

The Religious Society of Friends or Quakers established a Meeting House in Allonby in 1703 from a converted cottage, which was later extended. The Quakers formed formed a large and influential section of the local community. The Fish Yards for example, run by the Beeby family, was a very prosperous enterprise and from the late 18th Century until the mid-19th Century, Allonby was an important centre for herring fishing. These buildings later became a riding school. There was also a smoke house where some of the herring were turned into kippers. A Quaker reading room, built in 1862, occupies the site of the former weaving sheds.

The village has a long history of being a sea-bathing resort, going back to the 18th Century, when the fashion for bathing, and even drinking sea water, was considered a health cure. The Baths was built in 1835 and housed a suite of hot, cold, and vapour baths.

By the mid-19th Century Allonby was a popular destination for Cumberland's elite and by the late 1800s, Allonby had ten inns, serving a population of only around 400 people.

By the early 1900s ships were being built with iron hulls, making ships with wooden hulls redundant. Many of these were towed by tugs up the Solway to the shores of Allonby, from as far afield as Africa and Scandinavia, to be broken up and the wood used for pit props in the coal mines of the north. Some of these old beams can also be found in the structures of local houses.

In 1857, a new town was built 8 miles north of Allonby, named Silloth, the name derived from Selath, or 'sea barn'. These barns were used by the monks of Holme Cultram as part of their salt making industry.

The site for Silloth was chosen to give better access to the sea for the city of Carlisle and with it came a railway running from Port Carlisle. By the 1900s Silloth was a popular resort offering visitors, sea bathing and boating, with a fine promenade and vast public green. The town even boasted hydro medical baths which offered a range of theraputic sea water treatments.

The popularity of Silloth as a tourist resort and the railway appear to have drawn visitors away from Allonby. However with the advent of the motor car, the pull of Allonby's picturesque situation proved a popular destination once more and by the 1950s, the first caravan sites appeared.

From Wikipedia:
Allonby is a village on the coast of the Allerdale district in Cumbria, England. The village is on the B5300 road five miles (8 km) north of Maryport and eight miles (13 km) south of Silloth.

The village overlooks Allonby Bay in the Solway Firth. The area is within the Solway Coast Area of Outstanding Natural Beauty (AONB), and the historic county of Cumberland. Allonby, and the five-mile coastal strip of the bay, afford spectacular views across the Solway to the Galloway hills of southern Scotland. Both the South Saltpans beach and the West Winds beach were awarded the Blue flag rural beach award in 2005. The village is located on the 150 mile (240 km) Cumbria Coastal Way long distance footpath.

From the late 18th century until the mid-19th century, Allonby was home to a small fishing fleet. The main catch was Herring. Fish Yards were built where these were salted and packed in barrels made on the premises. There was also a smoke house where Kippers were produced.

In the early part of the 19th century Allonby was a popular sea-bathing resort. Baths were built in 1835. The buildings still survive as private residences in the Market Square.

The village is noted for a 17th-century coaching inn now known as the Ship Hotel. Charles Dickens and Wilkie Collins reputedly stayed at the hostelry in 1857 while touring northern Cumberland.

The Reading Room, opened in 1862, was designed by Alfred Waterhouse the famous Victorian architect when he was only 32-years-old. The building was largely financed by Joseph Pease who was Britain's first Quaker MP.

All images and my personal poetry/prose are protected by copyright and may not be reproduced, downloaded, distributed, transmitted, copied, reproduced in derivative works, displayed, published or broadcast by any means or in any form without prior written consent from the artist. Copyright on works derived from or based on images in the public domain applies only to the subsequent manipulation or painting resulting from my changes. The original image remains in the public domain and such images are used with in accordance with international copyright laws.

Bob/Nadine and Dawn, I can't express enough how grateful I am for the features in your fabulous groups ALL NOSTALGIA and SHIP TO SHORE AND ALL THINGS MORE. It means more than I can say.

Joe, thank you so much for featuring this image in your wonderful group 4000 OR UP. I can't tell you how much that means.

Congratulations! You are featured in the Fine Art America Group "Images That Excite You!"

Many thanks to Dan and to William (x2) for featuring this painting in their fine groups - PREMIUM FAA ARTISTS, BEST IMAGE PROMOTIONS and ART WITH FLAIR. I'm just thrilled.

Jeff and John my deepest thanks to you for featuring this image in your fabulous groups - PLEASING THE EYE and IMAGES THAT EXCITE YOU. I appreciate the honor so much.

F/L This is yet another beauty that challenges Currier and Ives! Your images have more life to them, and I think you could have a marvelous book going! Hugs.

Clare, Jouko, Stefon, Nina, Naomi and Bob/Nadine - I can't thank you enough for featuring this painting in your amazing groups - INTERIOR DESIGN, ART FROM THE PAST, APPRECIATING WORKS FROM ALL MEDIUMS, ART IT IS GOOD FOR YOU, THE BEST OF FINE ARTS and THE GALLERIA OF INTERIOR DESIGN. I'm so very honored.

I love your work Lianne, especially your Seas Stories. This is a wonderful artwork, L/F

What a fantastic image! Love it! vf tw g+

So engaging tells a story, many stories, leaves me to gaze and wonder what they are talking about! Great work!

Still among my favorites Lianne!!!

Wonderful work, Lianne. It's hard to imagine life in days past. One might be tempted to say 'in simpler times,' but surely that was not the case! f/l