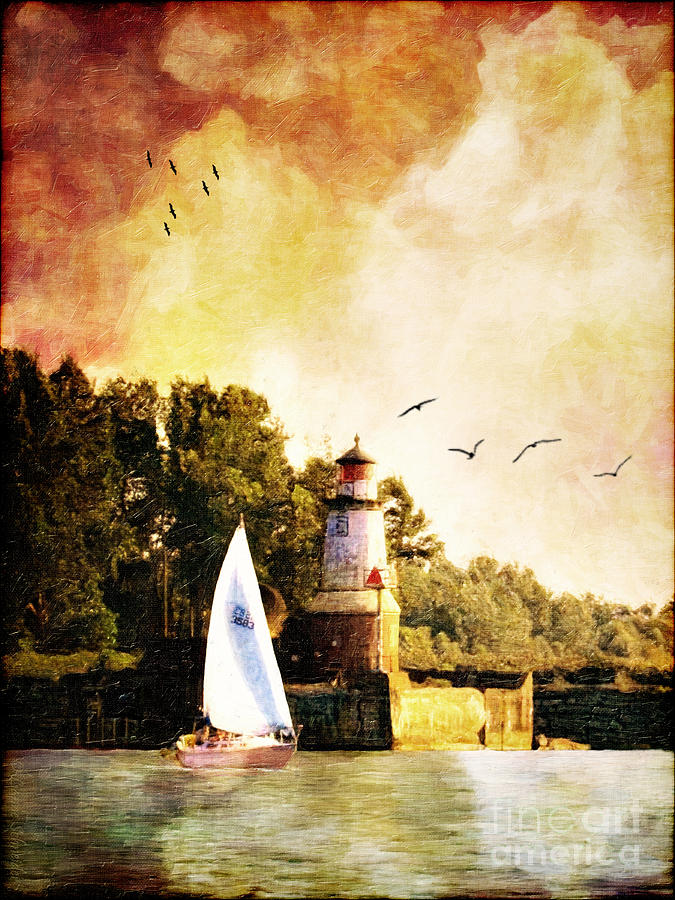 Buffalo South Entrance South Side
Buffalo's emergence as a bustling port continued well after the 1825 opening of the Erie Canal. The city quickly outgrew its first lighthouse erected in 1818, and the 1833 stone tower still standing today was superseded by a breakwater station in the 1870s. Still, the volume of ship traffic necessitated another expansion of the harbor, and a lengthy breakwater was built south of the main harbor. According to the 1900 Annual Report of the Light House Board, on June 6, 1900, $45,000 was appropriated for establishing suitable light and fog-signal stations to mark the main southern entrance of the new breakwater at Buffalo, N.Y. Plans for the light towers and fog-signal house, including foundation and pile protection work were completed, and plans for the keeper's dwelling are being prepared. Soon after the plans were finished, the breakwater where the light towers were to be erected was badly damaged by two severe storms, forcing the plans to be modified to provide greater strength to meet extreme conditions of wind and wave action. It was ultimately determined to place both a fog signal and beacon light on the south side of the southern harbor entrance, and an accompanying, smaller light on the north side.

The new south entrance beacons were especially important to turn of the century Buffalo, as the city became the world's leading lumber port and grain-milling and storage center. The southern entrance was also located near the recently completed Lackawanna Steel plant, which would be acquired by Bethlehem Steel in 1992 and become the world's largest steel mill during the frantic production accompanying World War II.

The Buffalo South Entrance South Side Lighthouse is a unique tower with a brown cylindrical base, a white, conical midsection, and a black lantern graced with glass panes in a diamond configuration. The tower's interior is furnished with fine wood wainscoting, and its lantern was originally equipped with a fourth-order Fresnel lens that produced the repeated sequence of two white flashes and a red flash, each spaced by ten seconds. The arch-roofed fog signal house adjoining the tower was painted brown. The station's original fog siren was replaced in 1934 by an air diaphone, which produced a two-tone air blast of three seconds, followed by a silent period of twenty-seven seconds.

A radiobeacon was established adjacent to the South Side Light on April 4, 1939. The tower transmitted a dash followed by three dots, Morse Code for "B."

Automated in 1962, the Buffalo South Side Lighthouse is currently inactive, having been replaced by a simple, modern post light that is very convenient to maintain. The old beacon's fourth-order Fresnel lens was removed in 1967, and after having been on display at the Coast Guard's Buffalo Station, in 1987 it was mounted in Buffalo's cherished and more centrally located 1833 tower, where it is decoratively lit at night. A 300-millimeter optic was mounted on the gallery outside the lantern room upon the removal of the Fresnel lens. This optic was active until 1993, when the current navigational was established on a nearby pole.

The closure of most of the Lackawanna steel plant has had a large economic impact on the Buffalo area and greatly decreased the amount of freighters calling at the port. A large portion of Buffalo's grain-milling and storage facilities have also shut down, but there was still an active General Mills plant in the harbor as of 2007. (During our boat ride through Buffalo Harbor, we were treated to the aroma of Cocoa Puffs.) Today, Buffalo Harbor is kept busy with fishermen and recreational boaters, and the city is planning on further development on the waterfront near the present Coast Guard station.

In July of 2008, the Buffalo Harbor South Entrance Lighthouse was offered to qualified groups through the National Historic Lighthouse Preservation Act, passed in 2000. Two groups, the Buffalo Lighthouse Association and the Maritime Activity Interyouth Network, submitted a letter of interest by the September 23, 2008 deadline and followed up with a formal application. The deed to the lighthouse has been transferred to the Lighthouse Association, and an $850,000 restoration is planned. Fundraising for the first phase of the project, a $185,000 stabilization and safety phase, began in 2012.

It's just my personal opinion, of course, but the Buffalo Harbor is beautiful and plans to develop the Erie Basin, Canalfront and the Outer Harbor into a state park with a public beach promise a renewal for this city once dubbed "the most beautifully laid out city in North America." The city boasts some of the most beautiful architecture and some amazing parks specifically designed for the city by Frederick Law Olmsted and Calvert Vaux between 1868 and 1896. This coordinated system of recreational spaces is the oldest such system in the United States. Don't sell Buffalo short!! We're making a comeback!!

This digital work is hand painted from a reference photo of my own.
Please contact the artist, Lianne Schneider, directly if you purchase this image as a giclee print on canvas, framed or unframed. A signed and numbered Certificate of Authenticity is available for each canvas indicating title of the work, artist's name, date of creation, a thumbnail of the painting, the origin of original work if the painting is a derivative, the number of your print in the limited printing and a guarantee that the work will no longer be available to the public in a canvas format once 25 canvas prints are sold.

All images and my personal poetry/prose are protected by copyright and may not be reproduced, downloaded, distributed, transmitted, copied, reproduced in derivative works, displayed, published or broadcast by any means or in any form without prior written consent from the artist. Copyright on works derived from or based on images in the public domain applies only to the subsequent manipulation or painting resulting from my changes. The original image remains in the public domain and such images are used in accordance with international law.

What a grand old lighthouse. This is a super digital photograph Lianne. You aced it and earned a gold medal for a beautiful work of art

Thank you so much Chad for featuring this painting in TODAY'S BEST ART. That means more to me than I can say.

Mariola I can't thank you enough for featuring this painting in 500 VIEWS - 1 IMAGE A DAY. That just means more to me than I can say. I'm very very honored.

My humble apologies to all who have come by to leave such lovely comments - it has taken me far too long to get back to you, visit your work and say a personal thank you in that way. Time has a way of getting away from me, I'm afraid. But I do thank you each so very much.

What a nostalgic, rich and evocative painting! Beautifully done and captivating work! l/f

This is a beautiful scene. The colors are wonderful and i love the way you did the sky. L/V