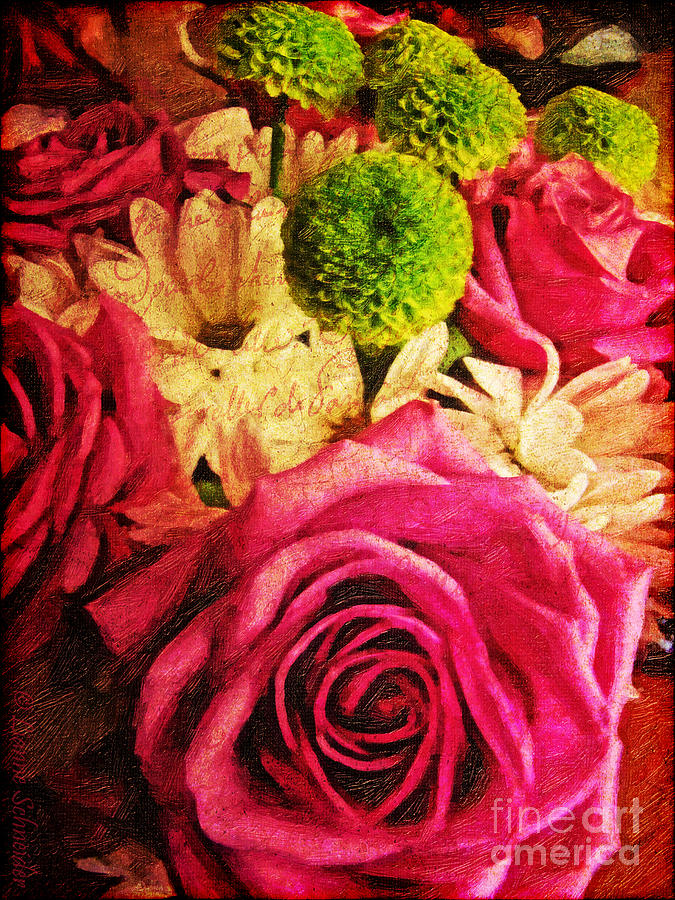 A digitally hand-painted image of a bouquet of flowers sent to me for my birthday a couple of years ago so the original reference photo is my own. I chose a slightly impressionist style combined with a pointillist layer and then a French letter texture. The French title "avec tout mon ame" means "with all my soul." [There should be a caret over the a in ame but FAA won't let me put it there]

From: University of Illinois Extension - http://urbanext.illinois.edu/roses/history.cfm

The History of Roses

Roses have a long and colorful history. They have been symbols of love, beauty, war, and politics. The rose is, according to fossil evidence, 35 million years old. In nature, the genus Rosa has some 150 species spread throughout the Northern Hemisphere, from Alaska to Mexico and including northern Africa. Garden cultivation of roses began some 5,000 years ago, probably in China. During the Roman period, roses were grown extensively in the Middle East. They were used as confetti at celebrations, for medicinal purposes, and as a source of perfume. Roman nobility established large public rose gardens in the south of Rome. After the fall of the Roman Empire, the popularity of roses seemed to rise and fall depending on gardening trends of the time.
White Rose of York

During the fifteenth century, the rose was used as a symbol for the factions fighting to control England. The white rose symbolized York, and the red rose symbolized Lancaster, as a result, the conflict became known as the "War of the Roses."

Roses were in such high demand during the seventeenth century that royalty considered roses or rose water as legal tender, and they were often used as barter and for payments. Napoleon's wife Josephine established an extensive collection of roses at Chateau de Malmaison, an estate seven miles west of Paris in the 1800s. This garden became the setting for Pierre Joseph Redoute's work as a botanical illustrator. In 1824, he completed his watercolor collection "Les Rose," which is still considered one of the finest records of botanical illustration.

It wasn't until the late eighteenth century that cultivated roses were introduced into Europe from China. Most modern-day roses can be traced back to this ancestry. These introductions were repeat bloomers, making them unusual and of great interest to hybridizers, setting the stage for breeding work with native roses to select for hardiness and a long bloom season. Many of these early efforts by plant breeders are of great interest to today's gardeners.


� Lianne Schneider
All images and my personal poetry/prose are protected by copyright and may not be reproduced, downloaded, distributed, transmitted, copied, reproduced in derivative works, displayed, published or broadcast by any means or in any form without prior written consent from the artist. Copyright on works derived from or based on images in the public domain applies only to the subsequent manipulation or painting resulting from my changes. The original image remains in the public domain and such images are used with in accordance with international copyright laws

Lianne,This is a wonderful piece of art. I wish I had that talent dear friend like you. Thanks for your comment ! Hugs,Marsha FV

Thank you so much Seth - I'm tremendously pleased and happy that you like it. Very touched by your lovely comment.

Thank you so much Maggie - so sorry it took me so long to get back to you! So glad you liked it!!

Hi Lianne, What a gorgeous birthday bouquet. Excellent colors, light and as always, your textures are amazing. Love it!! v/f

Big heartfelt thank you to everyone who has come by - I'm horribly behind in my visits to repay your kindnesses but I hope to catch up this week. In the meantime, I cherish each comment and thank you so much.

Thank you so much Tisha for featuring this image in your unique and wonderful group: VINTAGE WITH A SPRINKLE OF MODERN OR FANTASY. I'm tremendously pleased and honored!

Wow! Your work is beautiful. Bold colors with subtlety, and I love your use of textures. l/fav

Your work on this is wonderful Lianne!!! Your application of textures work beautifully together on your birthday roses!!! ~L/Faved

Wonderful image, Lianne, and just in time for Valentines Day! The french title is so romantic...lovely textures, too....LF

Such a gorgeous bouquet made even more so my your wonderful treatment and artistry. So beautiful, Lianne. v/fv/g+