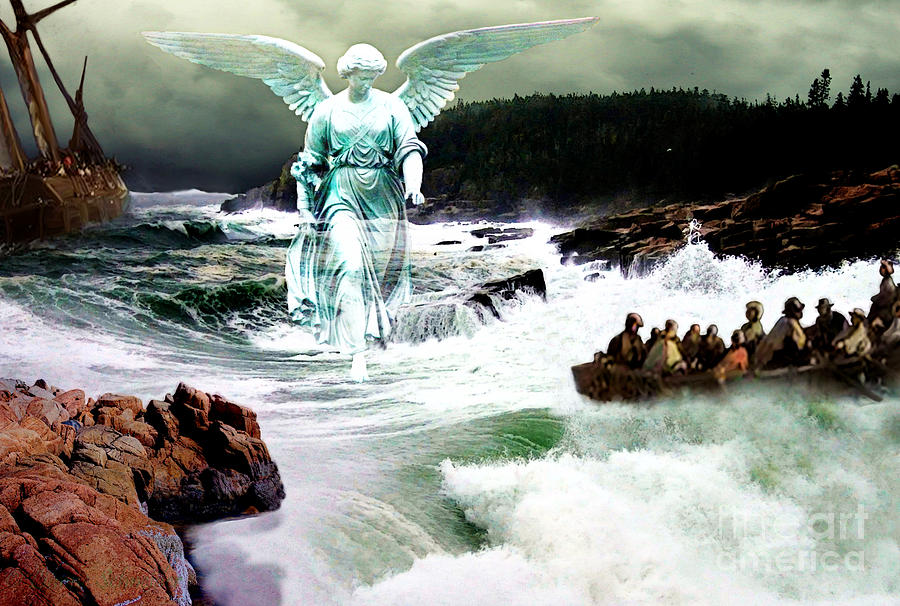 Angel of the Storm

Angel of the Storm

A guardian angel is an angel assigned to protect and guide a particular person or group. Belief in guardian angels can be traced throughout all antiquity. The concept of tutelary angels and their hierarchy was extensively developed in Christianity in the 5th century by Pseudo-Dionysius the Areopagite.

The theology of angels and tutelary spirits has undergone many refinements since the 400s. Belief in both the East and the West is that guardian angels serve to protect whichever person God assigns them to,[1] and present prayer to God on that person's behalf.

The belief in guardian angels can be traced throughout all antiquity; Pagans, like Menander and Plutarch, and Neo-Platonists, like Plotinus, held it. It was also the belief of the Babylonians and Assyrians, as their monuments testify, for a figure of a guardian angel now in the British Museum once decorated an Assyrian palace, and might well serve for a modern representation; while Nabopolassar, father of Nebuchadnezzar the Great, says: "He (Marduk) sent a tutelary deity (cherub) of grace to go at my side; in everything that I did, he made my work to succeed." [2]

According to Leo Trepp, in late Judaism the belief developed that "....[t]he people have a heavenly representative, a guardian angel. Every human being has a guardian angel. Previously the term `Malakh', angel, simply meant messenger of God."[3] The belief that angels can be guides and intercessors for men can be found in Job 33:23-6, and in the Daniel 10:13 angels seem to be assigned to certain countries. In this latter case the "prince of the Persian kingdom" contends with Gabriel. The same verse mentions "Michael, one of the chief princes". In the New Testament Book of Jude Michael is described as an archangel. Scripture says that God will "set a guard of holy angels over all the righteous" (1 En 100:5) to guard them during the end of time. In Matthew 18:10, Jesus says of children: "See that you do not look down on one of these little ones. For I tell you that their angels in heaven always see the face of my Father in heaven" (New International Version). This is often understood to mean that children are protected by guardian angels, and appears to be corroborated by Hebrews 1:14 when speaking of angels, 'Are they not all ministering spirits, sent forth to minister for them who shall be heirs of salvation?'

In Acts 12:12-15 there is another allusion to the belief that a specific angel is assigned to protect each individual. After Peter had been escorted out of prison by an angel, he went to the home of 'Mary the mother of John, also called Mark'. The servant girl, Rhoda, recognized his voice and ran back to tell the group that Peter was there. However the group replied, "It must be his angel"' (12:15). With this scriptural sanction, Peter's angel was the most commonly depicted guardian angel in art, and was normally shown in images of the subject, most famously Raphael's fresco of the Deliverance of Saint Peter in the Vatican.

Unlike patron saints, like St. Andrew the Fisherman or St. Brendan the Navigator or St. Erasmus (whose sign is something sailors called St. Elmo's Fire), there is no particular angel named as the guardian of sailors. The following is the Catholic prayer to one's guardian angel, usually taught to children as part of their bedtime prayers.


Angel of God, my guardian dear
to whom God's love commits me here.
Ever this day/night be at my side
to light, to guard, to rule and guide.
Amen.

Hand painted digitally using a composite of various images in the public domain. The resultant work therefore is a derivative in which various filters and textures are applied after the painting has been created.
Image Copyright - Lianne Schneider 2013
http://lianne-schneider.artistwebsites.com All rights reserved.
All images and my personal poetry/prose are protected by copyright and may not be reproduced, downloaded, distributed, transmitted, copied, reproduced in derivative works, displayed, published or broadcast by any means or in any form without prior written consent from the artist. Copyright on works derived from or based on images in the public domain applies only to the subsequent manipulation or painting resulting from my changes. The original image remains in the public domain and such images are used in accordance with international copyright laws.

To all of you who have come by while I have been away in hospital and left such warm, encouraging comments, I can't thank you enough for bolstering my spirits and making me feel that I've not been forgotten. I'll get to each of you as soon as I can!

Dear Lianne may you Guardian Angel ,watch over you till you can manage on your own ,,God Bless

Such a beautiful presentation of an Angel!!!! L/F

Exceptional work my dear friend; thinking of you! jd

Revisit this amazing image but would not take another L ...:(

F/L I missed this! So sorry, Lianne - it is AWESOME!

beautifully dramatic, you'd have to be brave to go to sea in those days, with out a guardian angel you wouldn't want to leave home v

Spectacular image ,very creative Lianne ..& I am sure we all have a gaurdian Angel L/F

this is so interesting, has so much going on and yet is simple. love your descriptions and work. L/F

What a beautiful and powerful image!!! Love this so much and the story that goes along with it! Thanks Lianne! v&f